Julián is a character from Barrio Sésamo, the Spanish co-production of Sesame Street.

He was a human, adult character who appeared in both the first and second periods of the series, from 1979 to 1980 and then from 1983 to 1987. He interacted with human-size Muppets, first Caponata and Perezgil, and then Espinete and Don Pimpón.

Julián was an old man with a white moustache. He owned a trolley of food, mainly confectioneries, which he reportedly sold to people on the Barrio. However, during the entire run of the series, he was never seen accepting a single coin from anyone, especially from children.

Although he liked to portray a harsh attitude, shouting through the streets, he was a kind old man who enjoyed the company of children (including Espinete, who was a child of sorts).

After 1987, with the end of the new period of Barrio Sésamo, Julián appeared in theater versions of the series, alongside Espinete and Chema the baker. 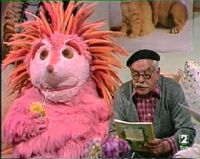 Julián, with his friend Espinete. 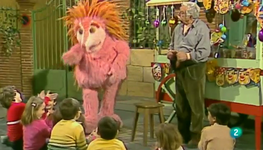 Add a photo to this gallery
Retrieved from "https://muppet.fandom.com/wiki/Juli%C3%A1n?oldid=1134739"
Community content is available under CC-BY-SA unless otherwise noted.