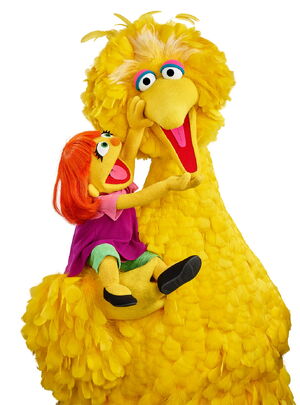 Julia is a four-year-old girl with autism from Sesame Street, introduced in 2015 as part of the Sesame Street and Autism: See Amazing in All Children initiative. She is a young girl with bright orange hair and big green eyes and is friends with Elmo and Abby. To describe how atypical Julia is, people usually say she does things in a "Julia sort of way."

Julia's characterization was originated by Leslie Kimmelman for the digital storybook We're Amazing, 1, 2, 3! She used her own experiences as the mother of a child with autism, as well as input from research and advisers from the autism community, to inform the story.

Due to the positive response to the outreach initiative, Julia was made into a physical Muppet that debuted in episode 4715 of the show, airing on April 10, 2017. She is performed by Stacey Gordon, who also used her own experiences raising her autistic son to help inform the actions of the character. She made her television debut on 60 Minutes on March 19, 2017, and subsequently appeared in a series of YouTube videos for SesameStreet's YouTube Channel.

A digital storybook released in April 2018, Family Forever: A Julia Storybook, introduced Julia's family - her mother (a teacher), her father (a medical professional and saxophonist) and her older brother Samuel.

Julia also joined the cast on the Sesame Street float in the 2018 Macy's Thanksgiving Day Parade, wearing a noise-cancelling headset so the loud volume wouldn't bother her.

Julia's puppet form
Add a photo to this gallery

Retrieved from "https://muppet.fandom.com/wiki/Julia?oldid=1126880"
Community content is available under CC-BY-SA unless otherwise noted.