Julie Andrews: One Step Into Spring is a Julie Andrews TV special featuring the Muppets which first aired on March 9, 1978 on CBS. The special also featured guests Leslie Uggams, Leo Sayer and Alan King. The broadcast was sponsored by Sears and produced via London Weekend Television.

At the end of Julie's opening number, "One Step," Gonzo appears from a trap door in the floor, dressed in a nightgown and cap, and tells her to keep it quiet. Instead, she does an encore over the opening titles.

Julie proceeds to introduce the Muppets, but Kermit comes on stage and tells her that they're aggravated that they didn't get to be in the opening number. He gets even more worried when Julie reluctantly tells him that the "hat sketch" had to be cut as well. Thus Kermit leaves it up to Julie to go backstage to tell the others, and exchange haughty banter with Miss Piggy. After the others leave to see if Leo Sayer needs them, Rowlf plays the piano as Julie sings "I'm Old Fashioned." Rowlf comments, "It's nice to know there's someone squarer than me."

Later on, after some snazzy numbers, Julie appears in a garden with some Muppet flowers, singing "Hurry, It's Lovely Up Here" as the flowers engulf her.

Kermit tells the flowers to disperse, then laments that he won't get to be in the Easter parade due to the lack of a bonnet. Julie then offers to take Kermit with her, and sings "Easter Parade," which leads into a sequence at the parade itself, with everyone attending, including cameos from Dr. Teeth, Fozzie, Thog, Sweetums, Timmy Monster and Big Mama. Kermit looks humiliated in his babyish outfit; Julie and Miss Piggy exchange looks of contempt; and Gonzo takes a group picture, which Kermit enters just a few seconds too late.

Alone, Julie sings "Too Shy to Say," and places a white top hat on the microphone as she exits.

A DVD release of the special by Legend Group Studios was initially scheduled for April 23, 2013, but it was subsequently withdrawn. Entries for the DVD are found on sites such as Amazon and Barnes & Noble, but it is not available for purchase. 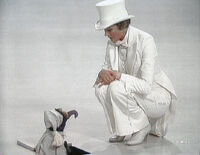 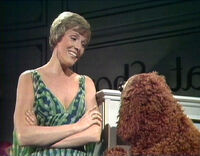 "Hurry, It's Lovely Up Here" 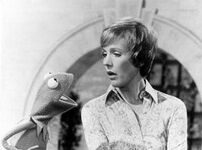 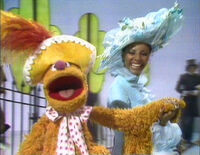 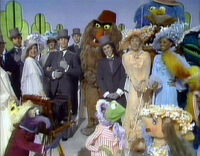 "Easter Parade"
Add a photo to this gallery 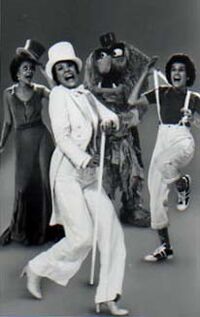 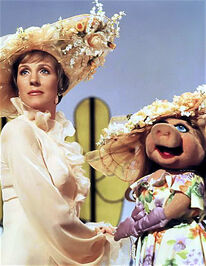 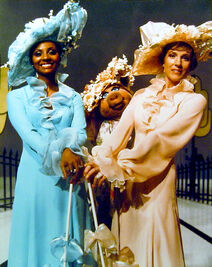 Leslie Uggams, Miss Piggy and Julie
Add a photo to this gallery 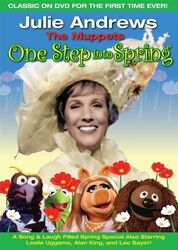 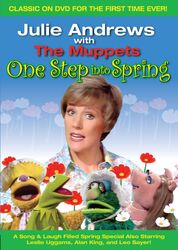 Retrieved from "https://muppet.fandom.com/wiki/Julie_Andrews:_One_Step_Into_Spring?oldid=1190356"
Community content is available under CC-BY-SA unless otherwise noted.