Junior Gorg is the son of Pa Gorg and Ma Gorg, and is the youngest of the Gorgs. As prince, he is given orders for a number of chores around the castle, including the maintenance of the royal radish garden. He sets traps in the garden outside the castle for the purpose of capturing the Fraggles, who sneak onto the Gorgs' property to harvest radishes. His favorite dish is watermelon en croute.[1]

Junior is proud of his Gorg heritage. He is always eager to please his parents, even when he doesn't understand the orders they give him.

In "Junior Sells the Farm", Junior says that he is "only 473." Since the episode aired in 1984, assuming a literal time-frame, this would place his birth date in the year 1511.

Junior Gorg's best friend is an enormous radish that he calls Geraldine.[2] This was apparently his only friend until "Bored Stiff", when he made friends with Gobo.

Seasons 4 and 5 saw a turnaround for the relationship between the Fraggles and the Gorgs. In "The Gorg Who Would Be King," Junior Gorg tries to prevent himself from becoming king by eating the last leaf on the Nirvana Tree, which ends up shrinking him to Fraggle size (an example of Switching walk-around and puppet). During that time, with the help of Wembley Fraggle, he ended up learning of the Fraggle and Doozer cultures, even preventing his parents from using a bomb to destroy Fraggle Rock. Upon returning to normal size, he becomes King and ends up disbanding the hierarchy as he throws his crown very far where it lands in a forest in Outer Space where Doc and Sprocket were camping. In "The Honk of Honks," he can be seen talking with Gobo about the Honk of Honks where he lends a noisemaker to help Gobo in his quest, implying that relations between the Gorgs and Fraggles have dramatically improved.

“Junior just never understood why people didn't like him. The little Fraggles, he just wanted to play with them. He was lonely![3]”

Junior returns in Fraggle Rock: Back to the Rock, with Dan Garza performing his face and voice and Ben Durocher as the body. Once again portrayed as an adversary to the Fraggles, Junior spends the first season of the show making friends with a plant (which he names "Junior Junior") and constructing a Gorg fountain in the garden.

“Junior treats the veggies in his garden with the individual care that he would to his friends if he had any. That's where his lonely and misunderstood heart was. His parents conditioned him to hate Fraggles, when all he wants is someone to share with.[4]”

Junior is performed by two puppeteers: one person in the Gorg costume, and another performing the voice and moving the character's eyes and mouth by remote control. A camera implanted in one of the eyes and a monitor screen built inside of the head unit allowed the puppeteer wearing the suit to see more clearly as well as granting them line of sight on the same level as the costume's eyes.

A small live-hand puppet version of the character was used in certain shots when Junior is seen on the roof of the castle (including "The Minstrels" and "Boober Gorg"). An alternate hand puppet version was made for the shrunken-down Junior in "The Gorg Who Would Be King."

According to Karen Falk, the original Junior Gorg is part of the collection donated to the Museum of the Moving Image, although as of 2021 he has yet to be put on display at the museum's Jim Henson Exhibition.[5] 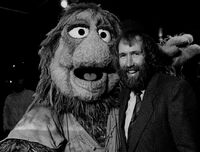 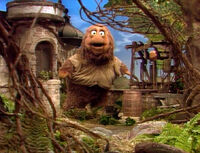 Junior Gorg seen through the hole to the Gorg's Garden. 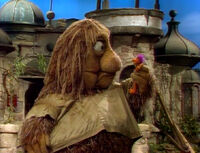 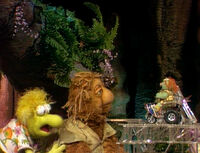 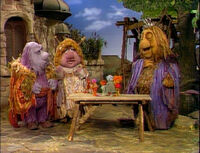 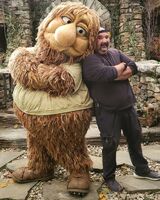