Just Like Ernie is a 1988 Sesame Street storybook featuring Ernie and Bert.

Ernie and Bert are as different as two friends can be. But one day Bert starts to be a little jealous of his easy-going friend. Everyone admires Ernie's sunglasses, sneakers, and jacket. They laugh at his jokes. Little Chrissy and the Alphabeats invite him to play drums for them that night at their concert. Bert goes home feeling left out, and decides to take action.

Taking the money from his piggy bank, Bert goes downtown and visits several stores. He shows up the next day at school and Betty Lou thinks he might be a new kid, but Ernie recognizes him. Bert has a coat, sunglasses, lunch box and red sneakers just like those worn by Ernie. But the day doesn't go well for Bert. First his sunglasses fall off and get bent. He forgets the punchlines to the jokes from his joke book. And he absolutely hates the banana split sundae that Ernie always gets after school.

At home, Ernie recovers Bert's paper clip collection and saddle shoes from under the bed. Bert says he doesn't want them so Ernie starts to play with the paper clips. But he can't string them into a long chain. Bert eagerly shows him how to make the chain. While Bert is making the chain, Ernie tries on Bert's shoes, which are too big for him. Bert finally admits that he likes being himself better than Ernie. He realizes that all of their friends like different things and that's okay.

When Ernie opens a bottle of Figgy Fizz, he trades the bottlecap to Bert for his new sunglasses, coat, sneakers, lunch box and joke book. , 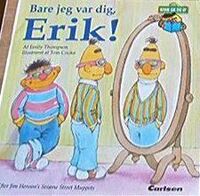 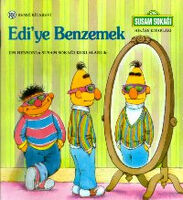 Retrieved from "https://muppet.fandom.com/wiki/Just_Like_Ernie?oldid=1160283"
Community content is available under CC-BY-SA unless otherwise noted.