Katie is a girl who uses a wheelchair who appeared on Sesame Park, beginning in 1988. She is optimistic and cheerful. Katie appeared with her other Canadian Sesame Street friends in Basil Hears a Noise. In some episodes, Katie would pretend to be Super Katie, a member of the Sesame Park Super Heroes Club.

Katie used a manual wheelchair in Canada's Sesame Street, and an electric one in Sesame Park.[1]

One of the Katie puppets was on display at the CBC Museum in Toronto. 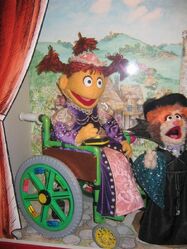 Katie at a CBC Museum display for Sesame Park.