Keep Christmas with You is a DVD release of a series of Christmas concerts by the Mormon Tabernacle Choir with Santino Fontana and the Sesame Street Muppets from 2014.

During the concert, Grover and Cookie Monster are in the control room of the theater, Ernie and Bert are stage managers, Elmo reports live from Temple Square in Salt Lake City, and Big Bird conducts the orchestra as they play the Sesame Street Theme. Cookie Monster spends a large part of the evening wishing he had some Christmas cookies, and when he finally gets some, he shows he has the Christmas spirit by sharing them with his friends.

The DVD was released on October 16, 2015, and contains the 93-minute concert, as well as 37 minutes of bonus features, including segments entitled, "Backstage with Santino Fontana", "Backstage with the Muppets from Sesame Street", and "Counting Down with The Count". 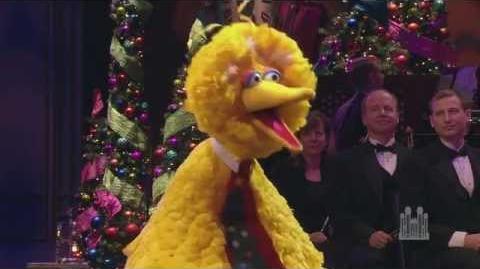 Retrieved from "https://muppet.fandom.com/wiki/Keep_Christmas_with_You_(video)?oldid=1093508"
Community content is available under CC-BY-SA unless otherwise noted.