Ken Campbell (1941-2008), born Kenneth Moore Campbell, was a British actor and comedian who voiced the March Hare in Dreamchild, and appeared on-camera as a radio sound-effects man. He later played Mr. Duck in the 1999 Creature Shop TV version of Alice in Wonderland.

Campbell is best known for his often unconventional theater work and series of self-written one-man shows. In 1976, he formed the Science Fiction Theater of Liverpool with Chris Langham, staging several of Campbell's plays and an adaptation of The Hitchhiker's Guide to the Galaxy (Campbell had appeared in Douglas Adams' radio version as Poodoo). He co-starred with John Cleese in an episode of Fawlty Towers and the film A Fish Called Wanda and frequently hosted BBC radio series on science and paranormal themes. 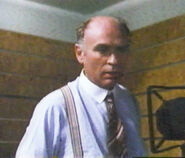 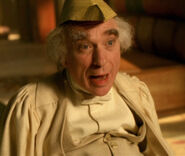 Wikipedia has an article related to:
Ken Campbell (actor)
Community content is available under CC-BY-SA unless otherwise noted.
Advertisement