Ken Jeong (b. 1969) is an American comedian, actor and physician. He is best known for his role as Ben Chang in the NBC comedy series Community.

Jeong appeared on Sesame Street to explain the word "deciduous" with Elmo in a Season 42 Word of the Day segment.

In The Muppets, Jeong plays the "Punch Teacher" Host. He also appeared in the Never-Ending Mahna Mahna Phenomahna. In August 2015, he posted a photo of himself to Twitter with Pepe the King Prawn, behind-the-scenes filming a promo for The Muppets.

Among Jeong's other credits are the feature films Transformers: Dark of the Moon, The Hangover: Part II, Despicable Me (with Jason Segel) and the Twilight Saga spoof Vampires Suck. Television appearances including voicing Dr. Perlmutter on American Dad!, The Office, and MADtv. 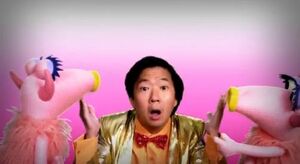 Jeong with The Snowths in The Muppets. 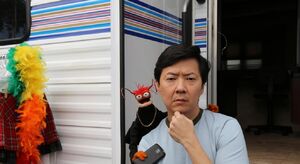 Wikipedia has an article related to:
Ken Jeong
Retrieved from "https://muppet.fandom.com/wiki/Ken_Jeong?oldid=1245125"
Community content is available under CC-BY-SA unless otherwise noted.