Although Kermit's Mom is seen for the first time in Kermit's Swamp Years, the audience only ever sees her from behind.

She speaks to Kermit one night and gives him advice as he gazes at the stars. Later in the movie, Kermit receives guidance from a star, which, like his mother, is voiced by Cree Summer. This could be interpreted as Kermit having mentally created the star based on his mother.

Kermit's Mom also appears in the Muppet Kids books Flip Flap Flop, Help! We're Lost!, and I Want to Go Home. Her face is still either off-panel or only seen from the back or profile, revealing a healthy mop of blonde hair.

In his book Before You Leap, Kermit has a section about his mother, stating she had a business career as a talent booker for the area theatre, The Bayou Bijou. Her office was littered with Playbills and flypaper. While working there she discovered acts like Lilly Ponds, The Lipizzaner Horseflies, and Moe Green and His Vegas Cuties. She also booked celebrities like Elton John and Garth Brooks.

In 2015, Kermit tweeted that he wouldn't be able to make it home for Thanksgiving dinner, "I sure will miss mom's cranberry ladybug sauce and horsefly stuffing." [1] 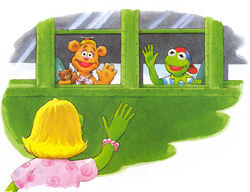 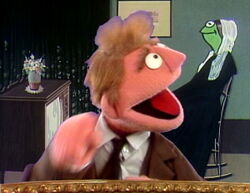 Leo says that Kermit's Mom will be happy.
Add a photo to this gallery
Retrieved from "https://muppet.fandom.com/wiki/Kermit%27s_Mom?oldid=1288072"
Community content is available under CC-BY-SA unless otherwise noted.