Kermit's Tales was the umbrella title for a series of animal stories which appeared in the 1989 Jim Henson's Bedtime Stories series and were later reprinted in Jim Henson's Muppet Stories in 1991. Despite the title, Kermit himself did not participate nor did he narrate, although in some Muppet Stories introductions he refers directly to the Tales stories and characters.

Instead, these original stories followed a wide range of forest wildlife, most of whom only appeared in a single story, but a few recurred. The characters and stories were created primarily by the same group who worked on other entries in the Bedtime Stories series, a mix of veteran or future Muppet/Sesame storybook authors and scriptwriters, notably Jim Lewis, Ellen Weiss, Michaela Muntean, and Barry Keating. Louise Gikow was the editorial director and penned one tale herself, "Lucy and the Firefly."

Despite the range of the writers, all stories were illustrated by John Gurney. Gurney's style is more painterly and lush, and the mammals and birds in particular lack the typical Muppet aesthetic, instead recalling vintage greeting card artwork. However, other characters, such as insects, are more Muppety, and the various frogs are nearly interchangeable with those seen cavorting with Robin in the Muppet universe stories. 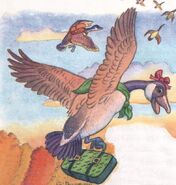 Harriet flying south for the winter 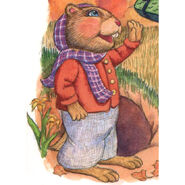 Itsy thinks about climbing up the waterspout 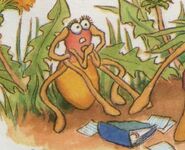 Mitzi Spider debating whether to climb the waterspout

Fred Fly and Isty Bitsy Spider getting washed down the waterspout 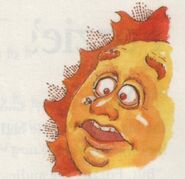 Bean Bunny pretending to be a Pirate 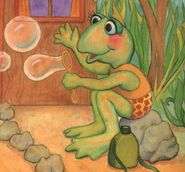 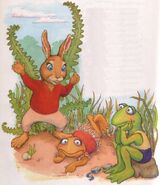 Bean, Hannah, and Chester deciding how to spend their summer day.
Add a photo to this gallery
Retrieved from "https://muppet.fandom.com/wiki/Kermit%27s_Tales?oldid=1093615"
Community content is available under CC-BY-SA unless otherwise noted.