Kermit was a full-color monthly publication for the German language countries, billed as "Das witzige Kindermagazin" ("the funny children's magazine").

Named after Kermit the Frog, the publication was launched in 1989 under distribution of Bastei-Verlag, a publisher responsible for numerous other German language translations an/or distribution of Muppet, Fraggle, and Muppet Babies books and comics available on the German, Austrian and Swiss markets throughout the 1980s and early 1990s.

From 1989 to 1990, four issues were released, containing mostly parody photos, games, comics and stories that had previously been published in Muppet Magazine and other Muppet-character related publications in the United States.

Each cover dons the "A Jim Henson Muppet Magazine" logo. Though unlike Muppet Magazine, its German counterpart did not include any Fraggle Rock or Muppet Babies content. 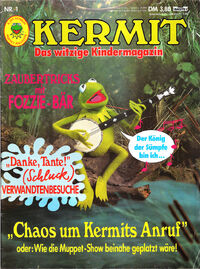 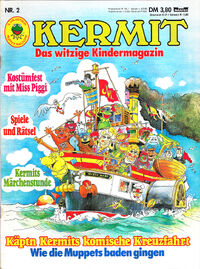 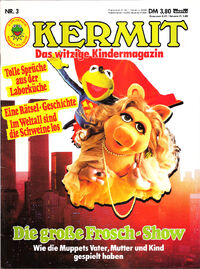 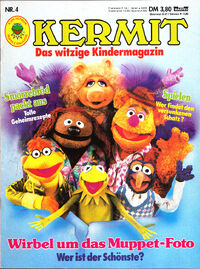 Retrieved from "https://muppet.fandom.com/wiki/Kermit_(magazine)?oldid=1276740"
Community content is available under CC-BY-SA unless otherwise noted.