Kermit Unpigged is a 1994 Muppet album featuring duets with celebrity singers. It was the last album released by Jim Henson Records.

Kermit the Frog and his Muppet friends arrive at a recording studio to record their new album. After an unhelpful encounter with receptionist Ernestine (Lily Tomlin), the Muppets split up to find their studio. Kermit tries to keep the gang together, but he's distracted by a phone call from Miss Piggy, who's running late for the recording session and wants to have a talk about their relationship. The pair sing "She Drives Me Crazy", which ends when an insulted Piggy hangs up on her frog.

Finding himself alone, Kermit wanders into a studio and finds country singer Vince Gill. Gill sees that Kermit is troubled, and they sing "Daydream", a relaxing song that cheers up the frog. Meanwhile, Clifford has found R&B singer George Benson, and the pair sing Benson's hit "On Broadway", backed by Rizzo and the Rhythm Rats.

Still searching for his friends, Kermit finds Linda Ronstadt. The pair shared a brief romantic connection in Ronstadt's episode of The Muppet Show, and their meeting now seems to spark another romantic moment. They sing "All I Have to Do Is Dream" together, and then Kermit takes his leave.

Meanwhile, Miss Piggy arrives at the studio, and looks around for the group. She stumbles into a room where heavy metal performer Ozzy Osbourne is recording, and mutters, "Boy, did I pick the wrong door." But Osbourne is happy to see Miss Piggy, and invites her to come in for a raucous duet of "Born to Be Wild".

Gonzo and Rizzo the Rat wander the halls of the recording studio, and the ever-hungry rat spots a door that he thinks says "Jimmy's Buffet". Gonzo corrects him—that's where pop singer Jimmy Buffett is recording, and they stop in to say hello. Buffett tells them about a strange dream that he had, leading to a duet of "Mr. Spaceman". The performance ends when the spaceship from the song reappears, and Buffett leaves to travel with his alien friends.

In another part of the studio, Kermit finds Don Henley, who sings a mostly solo version of Kermit's song "Bein' Green".

Left to his own devices, Kermit grabs a ukulele and plays an "unplugged" version of the Jimi Hendrix hit "Wild Thing". He's joined by Floyd Pepper and Animal, who turn the number into a loud rock jam. Kermit also finds his nephew Robin, and they sing a sweet number together, "Can't Get Along Without You".

Kermit finally manages to assemble the gang, and they sing a happy Beatles tune, "All Together Now". At the end of the album, Miss Piggy complains about the title of the album. 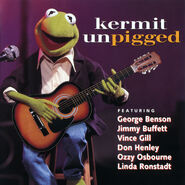