A meme is "an idea, behavior, or style that spreads from person to person within a culture." On the internet, a meme can take the form of an image macro, video, hashtag, quote, or a screencap of a movie or television scene.

In recent years, especially in reaction to increased media presence, Kermit the Frog has become the subject of various internet memes.

Given the unofficial nature of how memes propagate on the internet, Muppet Wiki's coverage of memes will be limited to those deemed notable by the editing community. This includes, but may not be limited to, memes that have been officially acknowledged in merchandise or other productions, those that have received an overwhelming amount of attention in the media, and other criteria as discussed in Forum:Index.

In March 2007, Sad Kermit, an unofficial parody, was uploaded to YouTube showing a store-bought Kermit puppet performing a version of the Nine Inch Nails song "Hurt" in a style similar to Johnny Cash's version. In contrast to the real Kermit character's usual family-friendly antics, the video shows the puppet engaging in drug abuse, smoking, alcoholism, performing oral sex on Rowlf the Dog, smashing a picture of Miss Piggy (with a breast exposed) and attempting suicide. The video spread virally across the Internet.

The Victoria Times Colonist called it an "online sensation".[1] The Chicago Sun-Times said it "puts the high in 'Hi-ho!'"[2] The London Free Press said "Sad Kermit is in a world of pain".[3] The Houston Press described it as the "world's most revolting web phenomenon".[4] SF Weekly described the unauthorized video as "ironic slandering."[5] Clips have been featured on the Canadian television series The Hour, where host George Stroumboulopoulos speculated that the Kermit version of "Hurt" was inspired by the Cash version rather than that of Nine Inch Nails.

The video spawned other parodies of "Sad Kermit" performing darker and more "adult"-oriented material, including "Creep" by Radiohead, "Twilight" and "Needle in the Hay" by Elliott Smith, "Rainbow Connection" (referred to as "The Rainbow Disconnection"), "Something I Can Never Have" by Nine Inch Nails and "Hallelujah" by Leonard Cohen.

A single shot from the video of the Kermit puppet huddled in a shower saw resurgence in 2016 as a reaction meme following the popularity of "But That's None of My Business" and "Evil Kermit" (see below).

The original video was removed from YouTube due to a copyright claim by The Jim Henson Company according to a message on the site.[6] 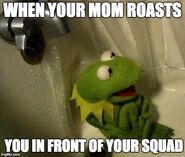 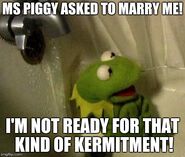 "But That's None Of My Business"

“But That’s None of My Business” is a sarcastic expression used as a postscript to an insult or disrespectful remark said towards a specific individual or group. The phrase was popularized through an image macro series in 2014 featuring Kermit the Frog and punchlines poking fun at a wide range of faux-pas and questionable behaviors in everyday social situations, punctuated with the passive-aggressive comment "but that's none of my business" and the image of Kermit relaxing while sipping a drink. The most popular image used is a still of Kermit sipping tea from a Lipton Tea commercial . Another popular image is of Kermit sipping through a straw from the first episode of The Muppet Show.

Kermit the Frog commented on the meme in a 2015 interview with BuzzFeed saying "you can't get publicity like that - I tell you." Before taking a sip from a cup and remarking "But that's none of my business."[7]

Charles Pulliam-Moore of the TV station Fusion praised "But That’s None Of My Business" as "a symbol for the comedic brilliance born out of black communities on the internet,"[8] but Stephanie Hayes of Bustle magazine slammed the memes as racist and obscene.[9]

The meme saw a resurgence in 2016 when LeBron James, who led the Cleveland Cavaliers to their first NBA championship title, posted a celebratory photo on Instagram wearing a cap embroidered with the image of Kermit sipping tea[10]; Good Morning America and other media outlets referenced the image using the hashtag #TeaLizard. New York magazine replied that, "Kermit is a frog. A frog is an amphibian. A lizard is a reptile. It’s just so insulting. Beyond a frog and a lizard both being clearly ectothermic, they couldn’t be any more different. Not all green things are the same, you ignorant bastards."[11] Popular Science also addressed the misnomer, writing "Frogs, which are amphibians, have quite a few significant differences from reptiles in how they breathe, their life cycles, whether they have scales or not... there's a lot to absorb here."[12] Kermit himself responded to being confused as a lizard on Twitter, tweeting: "Don't you hate when you get mistaken for someone you're not? Kermit #TeaFrog > #TeaLizard #ButThatsNoneOfMyBusiness"[13]

On a 2019 appearance on Drop the Mic, Miss Piggy disses Kermit in rap by calling him "a tea-spippin' glorified meme." At the Amphibia / Big City Greens panel at the 2019 D23 Expo, Kermit remarks, "I work part time as a tea-drinking meme, ya' know."

In celebration of Kermit's Birthday in 2020, the official Twitter account for Disney Emoji Blitz tweeted a graphic of the Kermit emoji accompanied by a glass of iced tea. [1]

In the premiere episode of Muppets Now, Kermit briefly self-referenced the iconic image while photobombing Sam during the "Muppet Masters" segment. 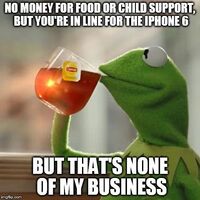 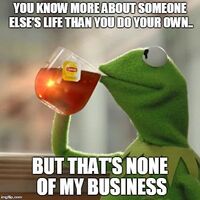 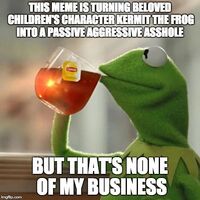 Evil Kermit is a captioned image series that started in 2016 featuring a screenshot of the scene in Muppets Most Wanted where Kermit is attacked by his evil doppelgänger Constantine. Similar to the trope of psychomachia, the meme pits a reasonable impulse ("me") against a more sinister or destructive indulgence ("me to me" or "also me").

Kermit commented on the meme when it trended on Twitter in November 2016, stating:

"#Constantine from #MuppetsMostWanted is trending as #EvilKermit. I’m very happy for him... which is how you can tell I’m #NotEvilKermit."[15]

During a appearance on A Very Pentatonix Christmas, Constantine attempts to ruin Kermit's reputation, because he laments that Kermit's a big star, while he's reduced to an internet meme.

The meme has spawned various imitations, which generally call back to the original image. One such variation uses a photoshopped image of Miss Piggy facing her "Evil Miss Piggy." This version of the meme specifically references the original image, but tends to relate to topics of pettiness or boredom.[16] Another variation includes a gif of the same freeze-framed Muppets Most Wanted scene, showing Constantine slapping the fake mole onto Kermit. As used in this variation, this is "me" chastising "myself" for an ignorant action. 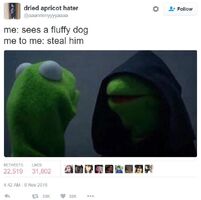 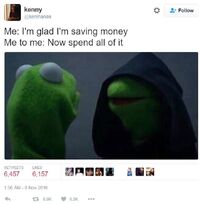 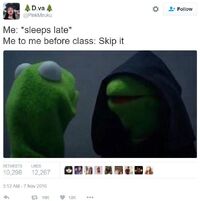 Kermit driving is a meme template from a BMW commercial from the year 2005. The commercial promoted their new BMW-1. The video featured Kermit driving a vehicle in a desert, but then being stopped by a live frog crossing his path.[17] Kermit yells” Hey fella, get out of the road” and “Pedestrians”. The commercials were shot in Calvinia in South Africa.[18] 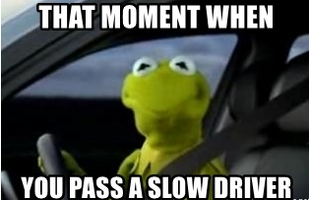 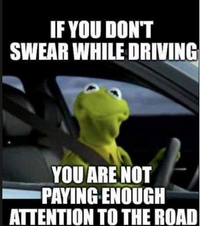 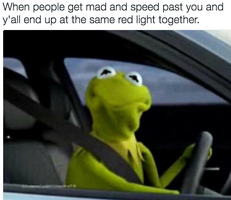