Kermit the Pig is a green pig with features similar to Kermit the Frog's, including a collar and ping pong ball eyes.

When the pigs take over The Muppet Show in episode 224, Kermit the Pig takes over as the show's host, and claims to be a frog. When guest star Cloris Leachman doesn't believe him, he ribbits for her convincingly.

By the end of the show, the real Kermit has taken control of the show again -- but Kermit the Pig shows up in the closing to say goodbye to the audience. Kermit, shocked at seeing his replacement, pushes the pig offstage. 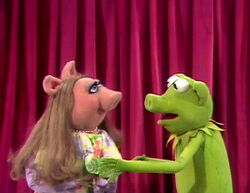 Miss Piggy confronts Kermit the Pig.
Add a photo to this gallery

Retrieved from "https://muppet.fandom.com/wiki/Kermit_the_Pig?oldid=1093585"
Community content is available under CC-BY-SA unless otherwise noted.