Two Muppets, Tommy and Fred, appeared in ads for Kern's Bakery in the late-1960s. 24 ten-second ads were produced in 1965 and 1966, and they aired from 1966 to 1969. Structurally, these ads were very similar to the Wilkins Coffee ads, and some are direct remakes, as were many of the commercials produced by Muppets, Inc. for local markets during this period. 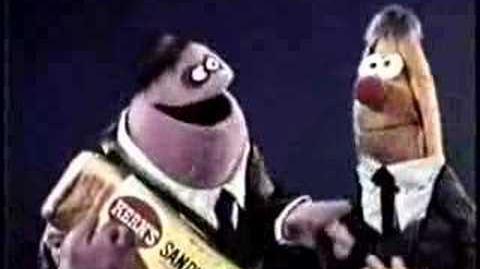 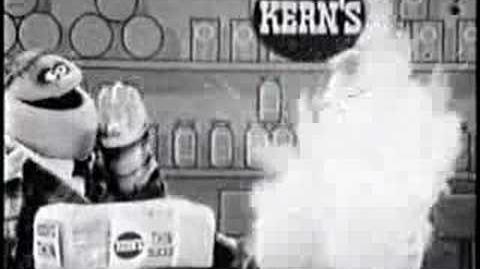 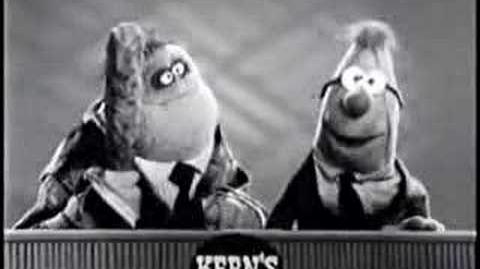 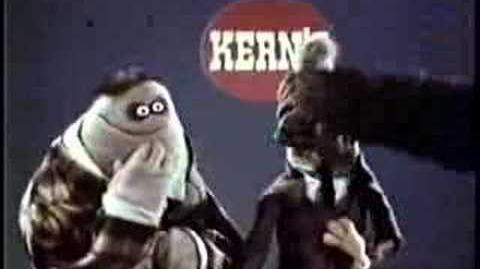 Kerns 04
Add a photo to this gallery

Tommy asks astronaut Fred, who is aboard a rocket ship, if he has any Kern's Bread on board. Fred replies that he does not. Upon liftoff, the rocket stays grounded, but Tommy's bag of Kern's Bread rockets upward, launching him into space with it. Fred says to himself, "Kern's Bread really is out of this world."

Tommy tells the viewers that his friend Fred will tell them how much he likes Kern's Bread. Fred asks him what Mr. Kern will do if he refuses, and gets crushed by his foot, concluding the commercial with Tommy telling us, "Oh, he'll probably put his foot down."

Tommy enters the frame, scatting and dancing with a bag of Kern's Bread on his head. Fred asks what he's doing. Tommy replies "Kern's Bread is always on my mind!". Fred mutters to himself, "I think it's gone to his head."

Tommy approaches Fred and asks him if he likes Kern's Bread. Fred responds, saying he doesn't know; as he does this, Tommy pulls out a revolver and shoots Fred. As Fred drops out of frame, Tommy remarks to the audience, "You gotta be positive."

Fred, holding a pair of cymbals, remarks that the taste of Kern's Bread is music to his ears. When Fred asks what the cymbals are for, Tommy clashes the cymbals over Fred's head, leaving him in a daze. Tommy states, "This is a very symbolic commercial."

Fred denounces the violence in the Kern's Bakery ads, stating this for the reason he does not eat Kern's Bread, then gets grabbed by by a gorilla and clobbered offscreen. Tommy casually remarks, "Violence? What violence?"

Fred puppet on display at The Jim Henson Exhibition, Museum of the Moving Image.

Tommy giving Fred a bite.
Add a photo to this gallery

Retrieved from "https://muppet.fandom.com/wiki/Kern%27s_Bakery?oldid=1372651"
Community content is available under CC-BY-SA unless otherwise noted.