Kerry Butler (b. 1971) is a Tony Award-nominated stage actress.

She appeared on Sesame Street in Episode 2253 as Charlotte, one of three teenaged students (including Gina, in her first appearance) who gather to stargaze one night on the roof of 123 Sesame Street.

Butler is married to Muppet performer and writer Joey Mazzarino, with whom she has a daughter named Segi, who they adopted from Ethiopia. Their daughter was the inspiration for the song "I Love My Hair," and its lead singer, later named Segi.

Her many Broadway and stage credits include a run of Little Shop of Horrors as "Audrey" (with Martin P. Robinson), Hairspray (with Harvey Fierstein), Xanadu (with Whoopi Goldberg), Beauty and the Beast, Catch Me If You Can, Mean Girls and Beetlejuice.

On television, she appeared as Claudia Reston on the soap opera One Life to Live, and has made guest appearances on 30 Rock and Gilmore Girls: A Year in the Life. 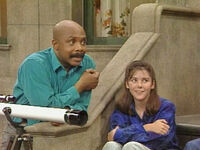 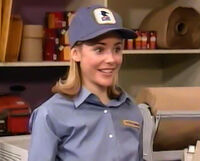 Ms. Camp in Episode 4511
Add a photo to this gallery

Wikipedia has an article related to:
Kerry Butler
Retrieved from "https://muppet.fandom.com/wiki/Kerry_Butler?oldid=1207698"
Community content is available under CC-BY-SA unless otherwise noted.