Kerstfeest met Bert & Ernie (A Christmas Celebration with Bert and Ernie) features all new material that was never seen on the show.

As always, Bert would much rather read his book instead of singing songs and playing games for the Christmas album. After a fun song about snow falling everywhere, Ernie has a special Christmas present for Bert: warm winter clothes. Bert doesn't need them because it's warm enough inside, so Ernie opens the window... Bert is in the mood for snacks and eats all the candy out of the Christmas tree. This leads to a discussion about what happens if you want too much of certain things.

Ernie discovers his reflection on a Christmas ornament and pretends he's hanging in the tree. Bert reads his story about Zippy and Zoppy, who are visiting their cousin Zappy for Christmas. The room is a big mess - and strangely enough, most of the toys lying around are Bert's. In all the excitement, Bert accidentally breaks wind, which Ernie calls a "Christmas Wind". Bert sings a song about New Year's Eve. Uncle Rudolf shows up for the Christmas party, along with Grover and Oscar. They finish the album with a Christmas singalong at the piano. 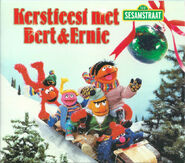 Retrieved from "https://muppet.fandom.com/wiki/Kerstfeest_met_Bert_%26_Ernie?oldid=1160749"
Community content is available under CC-BY-SA unless otherwise noted.