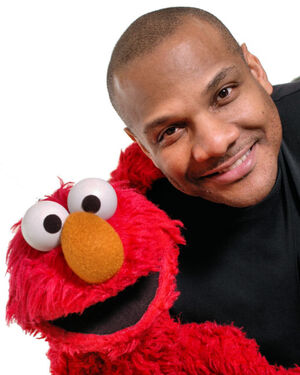 Clash resigned from his role on Sesame Street in November 2012 following allegations of improper sexual conduct. He has since continued to puppeteer on various Jim Henson Company projects.

Kevin Clash officially became a Sesame Street puppeteer in 1984. Some of his earliest characters included Hoots the Owl and Dr. Nobel Price, later supplemented by the likes of Baby Natasha and Kingston Livingston III. However, it was Elmo who became his main character, once Clash assumed the part from previous puppeteers Brian Muehl and Richard Hunt, and placed his own imprint on the red monster. Clash has also sung in voice-over in a variety of film and cartoon inserts on the series, including "Skin", "Pasta", "Animal Books", and "Take Care of That Smile."

Clash's departure marked the end of his tenure in his creative roles at Sesame Workshop, and as performer of Elmo and his other Sesame Street characters. Some of Clash's final performances as Elmo were for Season 44, which aired in 2013-2014; performing the character in several segments and Street scenes (with Clash only providing pre-recorded vocal tracks for most of the latter). Clash's last known public performance of Elmo was during a radio interview with WNYC on October 30, 2012 (twenty days before his official resignation).

Ryan Dillon took over performing Elmo in 2013. In a statement regarding Clash's departure, Sesame Workshop stated: "Elmo is bigger than any one person and will continue to be an integral part of Sesame Street to engage, educate and inspire children around the world, as it has for 40 years."[9]

Clash has since relocated to the Los Angeles area, continuing to work with The Jim Henson Company at their West Coast headquarters. He has performed in projects such as The Happytime Murders, The Dark Crystal: Age of Resistance (puppeteering Aughra), and Earth to Ned. He also played Wembley Fraggle at the Puppets for Puppetry fundraiser event on September 24, 2016 and was one of the puppeteers to perform Uncle Traveling Matt (to Dave Goelz's voice) in Fraggle Rock: Back to the Rock episodes 102-105 and 107-112.[10]