Khokha (in Arabic الخوخة) is a furry monster on Alam Simsim, the Egyptian co-production of Sesame Street. Khokha is a peach-colored monster (her name also means peach) who has black hair, with streaks of yellow and purple.

Khokha was created to help kids, specifically girls, to be whoever they want to be, since girl empowerment isn't common in her middle-eastern area.

In 2009, Khokha visited New York City as part of a trip sponsored by the Mosaic Foundation. The group, consisting of the wives of Arab ambassadors to the US, funded the show's dubbing into Classical Arabic, for broadcast throughout the rest of the Middle East.[1]

Khokha is a four-year-old character with a passion for learning. She wants to know everything about everything. She is curious, creative, industrious, resourceful, and loves to solve problems. She enjoys making things and also taking things apart. Her friends often join her in her pretend workshop to create, invent, and have fun. 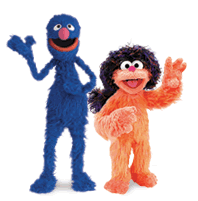 Khokha and Grover
Add a photo to this gallery
Retrieved from "https://muppet.fandom.com/wiki/Khokha?oldid=1093648"
Community content is available under CC-BY-SA unless otherwise noted.