Kids' Guide to Life was a series of Sesame Street videos and book and tape sets distributed by Sony Wonder from 1996 to 1998. The series was designed to help children overcome common problems such as sharing and telling the truth.

The videos feature an opening sequence, repurposing footage from various Sesame Street segments, with a theme song composed by Christopher Cerf[1] and sung by The Kids, Telly Monster and Elmo.

Each video has a framing story that prominently features a guest star. Learning to Share features Katie Couric, playing herself as a reporter for "Cooperation Today." Telling the Truth guest stars Dennis Quaid, who plays Telly's uncle Tommy. Big Bird Gets Lost features Frances McDormand as an employee of ABCD Mart. At the conclusion of the program, the guest star appears in a segment giving a message to parents.

Big Bird Gets Lost1998
Add a photo to this gallery 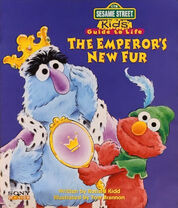 Ernie Gets Lost1998
Add a photo to this gallery

Retrieved from "https://muppet.fandom.com/wiki/Kids%27_Guide_to_Life?oldid=1188297"
Community content is available under CC-BY-SA unless otherwise noted.