Kim Possible is a Disney-produced animated series which ran on the Disney Channel from 2002 to 2007. The series focused on the title character, a teenage girl who embarks on missions to save the world and fights an assortment of supervillains (with the help of friends and a naked mole-rat).

Clips from the series were used in the "We Are Family" music video, and Kim herself appeared on the DVD cover.

Wikipedia has an article related to:
Kim Possible 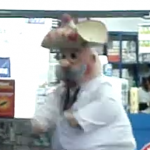