King Arthur is an important figure in English mythology, where he appears as the ideal of kingship both in war and peace. He is the central character in a cycle of legends known as the Matter of Britain. Although there has been debate over whether King Arthur might in fact have existed, like Robin Hood, he is generally considered a figure of myth and folklore, but one closely tied to both the literature and political history of Britain. Arthur and the Arthurian legends in general (including such figures as the wizard Merlin, Guinevere, and Lancelot), have often been portrayed, spoofed, or referenced in Muppet/Henson productions. 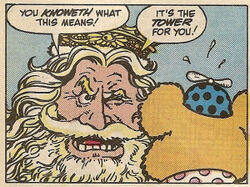 Wikipedia has an article related to:
King Arthur
Community content is available under CC-BY-SA unless otherwise noted.
Advertisement