King Goshposh was created for Jim Henson's failed 1962 pilot Tales of the Tinkerdee, and also appeared in another pilot, The Land of Tinkerdee. Goshposh was a genially dunderheaded monarch, with a fondness for parties and presents. He spoke with a broad Texan accent.

Goshposh finally appeared on screen in the 1967 summer replacement series Our Place, appeared under the name "King Louie" on The Mike Douglas Show and in The Muppets on Puppets, had the name King Impossible the Third in Rumple Wrinkle Shrinkel Stretchelstiltzkin, and took a leading role as Prince Arthur Charming's father in the 1970 special Hey Cinderella! He later made an appearance in The Perry Como Winter Show in 1972, playing a hotel manager.

King Goshposh smoked a cigar in many of his scenes; unlike other Muppet cigar-chompers, his was actually lit. In his appearance on The Mike Douglas Show, conversing with Hermione Gingold, Goshposh explains that he has in fact lost his kingdom: "I blew it."

A refurbished, full-body version of the puppet, renamed King Rupert the Second, was featured in the 1971 special The Frog Prince and in The Muppet Show episode 121.

Since 2015, the King Goshposh puppet is on display at the Center for Puppetry Arts as part of their permanent Worlds of Puppetry exhibit. 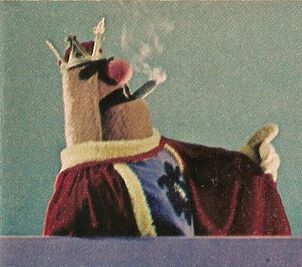 The original puppet, used for Tales of the Tinkerdee. 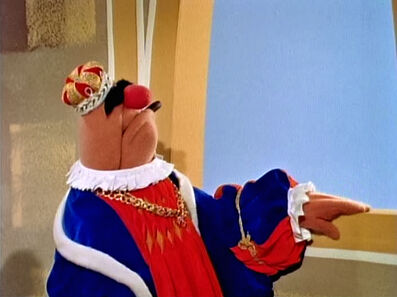 A rebuilt King Goshposh, as seen in Hey Cinderella! 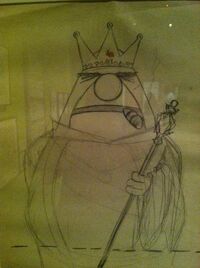 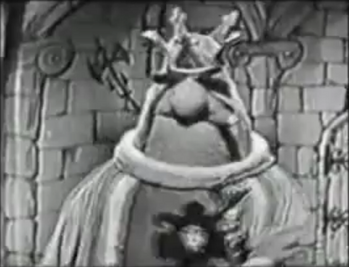 Retrieved from "https://muppet.fandom.com/wiki/King_Goshposh?oldid=1093697"
Community content is available under CC-BY-SA unless otherwise noted.