Kippi Ben Kippod (קיפי בן קיפוד) (translated means Kippi son of Hedgehog) lives on Rechov Sumsum, the first Israeli co-production of Sesame Street. Kippi is a full-bodied character who is cheerful and optimistic, and has a pet goat named Sheba.

Kippi first appeared on Rechov Sumsum in 1983, and he also appeared on Shalom Sesame, a bilingual 1986 Israel-US co-production.

For Rechov Sumsum/Shara'a Simsim, the Israeli/Palestinian co-production, Kippi, along with Moishe Oofnik, was retained. Kippi was redesigned for the new show, with a more traditional "Muppety" design, and has a male performer, Guy Friedman.

For US co-productions, such as Shalom Sesame, the producers chose to translate kippod (קיפוד) as "porcupine," and Kippi refers to himself as "your friendly neighborhood porcupine." Bill Cosby also refers to Kippi as a porcupine in the Sesame Street: 20 and Still Counting special.

The translation of קיפוד is actually "hedgehog," according to Milon, a Hebrew-English dictionary. Hedgehogs and porcupines are often confused by laypeople, although they are not part of the same family.

Kippi has a similar design to Espinete from Barrio Sésamo, who is a hedgehog. Additionally, Kippi possesses a long snout like that of a hedgehog, which porcupines lack. 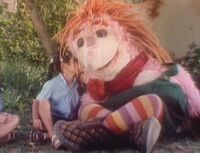 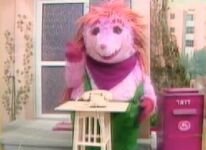 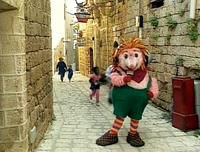 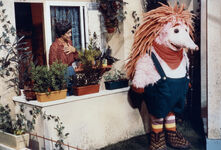 Retrieved from "https://muppet.fandom.com/wiki/Kippi_Ben_Kippod?oldid=1113598"
Community content is available under CC-BY-SA unless otherwise noted.