Kira is a Gelfling living in the world of Thra. She was orphaned as a child by an attack from a pack of Garthim, and is now the last living female Gelfling.

Rescued by the Podlings and raised by her foster mother Ydra, she learned to live in harmony with the woodland creatures who inhabited the swamps and forests surrounding the The Pod Village. She has the ability to summon Landstriders and Nebrie, and she keeps an excitable creature named Fizzgig as a companion.

Like all females of her species, Kira possesses wings. She uses them to soften descent rather than for bird-like flight. This skill comes in handy when she meets Jen, the last living male Gelfling. On a quest to heal the Dark Crystal, Jen recruits Kira who becomes essential in this quest.

Unlike her companion, who only speaks the language of the Mystics, Kira is fluent in the native Gelfling language, as well as several others. 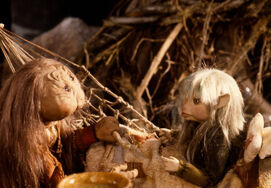 A young Kira being raised by Podlings 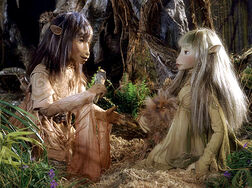 Proving one with nature, summoning Landstriders