Kismet the Toad is Kermit the Frog's impersonator in The Muppet Show Comic Book: The Treasure of Peg-Leg Wilson. He is one of many lookalikes hired by the Frog for an all-Kermit closing number. However, because Kismet turns out to be Kermit's only impersonator, the act is replaced with a new one.

Kismet steals Miss Piggy's jewels and replaces them with fakes, but after assaulting Dr. Bunsen Honeydew in the basement and recovering the treasure, Miss Piggy and a pig police officer catch him. He is asked about Piggy's jewels, which are very realistic fakes, and admits to his crimes. He is then arrested. 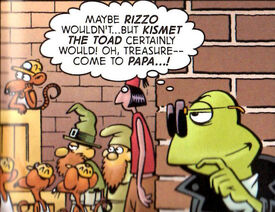 Add a photo to this gallery
Retrieved from "https://muppet.fandom.com/wiki/Kismet_the_Toad?oldid=1093726"
Community content is available under CC-BY-SA unless otherwise noted.