Kooky Pens are sets of miniature writing pens sold at Disney theme parks with the likenesses of various Disney characters, such as Mickey Mouse, Disney Princesses, and the Pixar characters drawn on them. In 2010, Disney released a series of Muppet-themed pens featuring Kermit the Frog, Beaker, and Miss Piggy. In 2011, a pen picturing Kermit with top hat and tuxedo was released in Kooky Kollection #9. 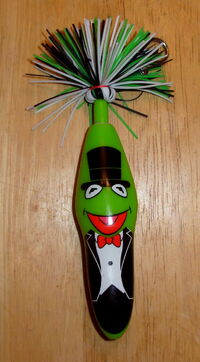 Add a photo to this gallery
Retrieved from "https://muppet.fandom.com/wiki/Kooky_Pens?oldid=1093766"
Community content is available under CC-BY-SA unless otherwise noted.