Lady Gaga (born Stefani Germanotta in 1986) is an American recording artist. She appeared with the Muppets in Lady Gaga & the Muppets' Holiday Spectacular which aired on ABC in November 2013, and makes a cameo appearance in 2014's Muppets Most Wanted during "We're Doing a Sequel."

She took Kermit the Frog as her date to the 2009 MTV Video Music Awards.[1] In an interview with Perez Hilton, Miss Piggy dismissed the concept of them dating, saying that "No, no I don't talk about lies. I talk about truth."[2]

She also made headlines wearing a top made entirely of plush Kermit the Frogs by Jean Charles de Castelbajac on German television. She wore the outfit as a statement against wearing fur as it "looked like a bunch of dead Muppets".[3]

Jason Segel and Nick Stoller had originally written a cameo for her in The Muppets. It was reported that Lady Gaga would make her first big screen appearance in the 2011 film and was going to be facing off against Miss Piggy in a dance-off. However, when director James Bobin was forced to bring the length of the film down to 98 minutes, Gaga's sequence was dropped from the film. Producer Clint Morris said:

“Stefani Germanotta's [aka Lady Gaga] big moment from the film was cut. With her entourage, including Ed Helms, Eric Stonestreet and John Krasinski, Gaga would have gone head-to-head with Miss Piggy in a sequence. Rumor has it Madonna's "Vogue" was somehow involved (which makes sense considering Piggy is the editor of Paris Vogue magazine in the film). Guessing Gaga, who judging from the smooch she shared with Kermit at the 2009 Video Music Awards is a big Muppets fan, is crushed she got the scissors treatment.[4]”

Gaga does not appear in the finished movie. It is unknown if she ever filmed the scene, or if her scene was cut earlier in the production.[5]

Lady Gaga did, however, appear as herself in Muppets Most Wanted, during the song "We're Doing a Sequel" (appearing next to Tony Bennett at a craft services table).

On March 28, 2011, Gaga's 25th birthday, Ellen DeGeneres called the artist from her daily talk show, The Ellen Degeneres Show, to wish her a happy birthday. During the call, Ellen presented a birthday cake to the singer, commemorating a number of famous outfits that the artist wore throughout her young career, including a Kermit the Frog face, facing the audience.

In her memorandum for the May 2011 issue of V Magazine, Gaga writes: "Just like sometimes Picasso was Matisse’s Mondrian, and vice versa. Bowie is often my Mondrian, as are Michael Jackson, Prince, Lita Ford, and Madonna. Mugler is my silhouette’s Mondrian, Cindy Crawford is my sexuality’s, Kermit is my whimsy’s."

In April 2020, Gaga collaborated on the cross-network special, One World: Together at Home, credited for helping curate its celebrity lineup which also includes the Sesame Street characters. 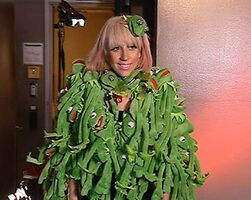 Lady Gaga in her Kermit dress 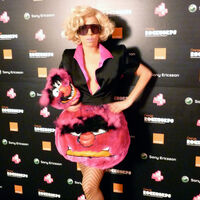 Lady Gaga in an Animal-inspired dress 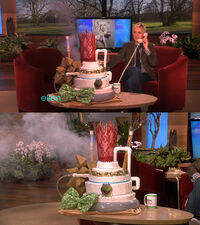 Ellen's birthday cake for Lady Gaga, including Kermit's face
Add a photo to this gallery

Visit the:
Lady Gaga Wiki
Wikipedia has an article related to:
Lady Gaga
Retrieved from "https://muppet.fandom.com/wiki/Lady_Gaga?oldid=1356100"
Community content is available under CC-BY-SA unless otherwise noted.