In 2003, Bush appeared on Sesame Street reading a book to Big Bird, Elmo, and some kids (First: Episode 4032). The same year, she appeared in a PBS promo with Elmo about the importance of reading.

While in the White House, Bush hosted the annual National Book Festival, and the White House Egg Roll, an event that was attended in 2007 by an Abby Cadabby walk-around character.

Bush was honored at the Sesame Workshop gala in 2007 for her work in promoting children's literacy.

Bush and Sesame Street creator Joan Ganz Cooney were both members of the Kappa Alpha Theta, the first Greek-letter fraternity for women. 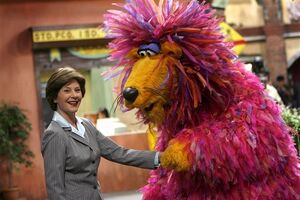 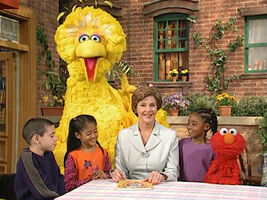 Laura Bush with Big Bird, Elmo, and some kids on Sesame Street episode 4032. 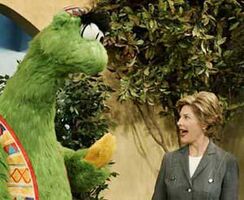 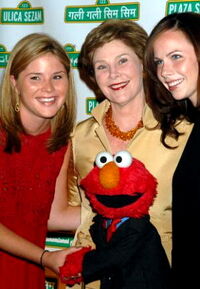 Bush, with her daughters Jenna and Barbara, being greeted by Elmo at the 2007 Sesame Workshop gala.
Wikipedia has an article related to:
Laura Bush
Community content is available under CC-BY-SA unless otherwise noted.
Advertisement