LeAnn Rimes (b. 1982) is a Grammy award winning American country singer and occasional actress. She began her career as an eight year old champion on Star Search before releasing her #1 album Blue.

Rimes was photographed with Miss Piggy backstage at the 2011 Country Music Association Awards where Piggy was a presenter.

In 2018, Rimes and Kermit the Frog met during his appearance on the American Idol finale. 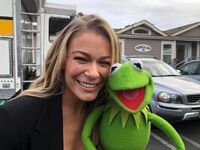 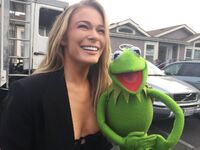 Wikipedia has an article related to:
LeAnn Rimes
Retrieved from "https://muppet.fandom.com/wiki/LeAnn_Rimes?oldid=1251110"
Community content is available under CC-BY-SA unless otherwise noted.