Lea Thompson (b. 1961) is an actor working in Hollywood since the early 1980s who is best known for appearing in the Back to the Future. She starred as the title character in four seasons of Caroline in the City, and has also appeared in Jaws 3-D, SpaceCamp (with music by John Williams), Howard the Duck (with Tim Robbins), Dennis the Menace (with Walter Matthau), The Beverly Hillbillies (with Lily Tomlin), and The Little Rascals (with Mel Brooks, Daryl Hannah, and Whoopi Goldberg).

Her social media photos were taken while filming her appearance in "Hostile Makeover" where she meets Kermit in an elevator. The situation fulfills one of Kermit's fantasies until Gonzo joins them in the elevator and ruins the moment. 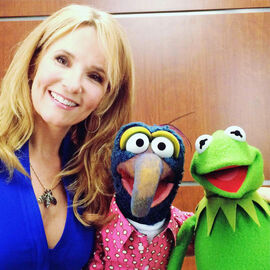 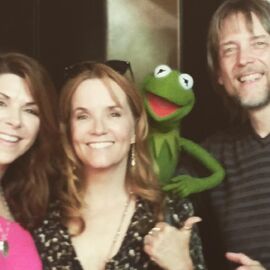 Amy Pietz, Thompson, Kermit, and Steve Whitmire
Add a photo to this gallery

Wikipedia has an article related to:
Lea Thompson
Retrieved from "https://muppet.fandom.com/wiki/Lea_Thompson?oldid=1258713"
Community content is available under CC-BY-SA unless otherwise noted.