"Lean On Me" was a pop hit for singer Bill Withers. It was sung in German by Mary Roos for that country's broadcast of episode 121, for Die Muppet Show. It was titled "Komm zu mir," which translates to "Come to Me."

It was later sung by Paula Abdul in Muppets Tonight Episode 206 to Robot Abraham Lincoln.

In Muppets Tonight episode 202, Rick Moranis sang part of it in his medley "A Salute to Late Fifties Crooners, Obscure British Bands, and Bill Withers." 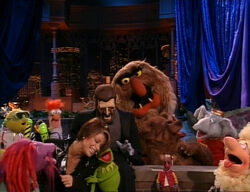 Paula Abdul singing "Lean On Me"
Add a photo to this gallery
Retrieved from "https://muppet.fandom.com/wiki/Lean_on_Me?oldid=1095178"
Community content is available under CC-BY-SA unless otherwise noted.