Lefty is a shady-looking salesman in a trench coat who appears on Sesame Street. He speaks in a whispery voice, and usually tries to sell Ernie such esoteric items as a letter O, a snowman, or an invisible ice cream cone. His sales pitches are rarely successful.

Lefty had his own "sneaky" musical theme at the beginning of most of his sketches. The Salesman signals to Ernie with a furtive whisper: "Hey, bud! C'mere." Ernie shouts, "Who, me?" and the Salesman shushes him excitedly. Ernie whispers, "Who, me?" The Salesman answers with an elongated "Riiiiiight," and then begins his sales pitch: "How would ya like to buy..."

Lefty's most well-known appearance was a song, "Would You Like to Buy an O?", which was recorded for the 1971 record The Muppet Alphabet Album, and later used on the show. (First: Episode 0364)

Some of Lefty's sketches involved his attempts to carry out assignments from his boss. (see table guide down below for the page with those skits). He is the only character who refers to him as "Lefty." Until the late 2000s, production materials, storybooks, and record albums have referred to the character simply as "The Salesman."

A 2008 book, Storybook ABCs, is the first use of Lefty's name in print. Grover is dressed as Jack (of "Beanstalk" fame), and the Salesman approaches from behind a tree with an offer: "Care for some candy beans for that cow?" Jack replies, "Thanks, Lefty! And do you also have a candlestick?" Lefty apparently has one in stock -- a few pages later, Jack (of "Jack Be Nimble" fame) jumps over the candlestick. At the end of the book, Lefty returns to feed four and twenty blackbirds with birdseed that fills his carry-all bag.

Lefty was mostly active on the show up until season 6, but his puppet would still occasionally be used in promo pictures, including a a cast image from season 10. After his retirement, his existing skits were still syndicated up until season 29.

After many years of absence, Lefty resurfaced at San Diego Comic-Con in 2019 during the "Sesame Street Puppets Live!" panel, performed by Ryan Dillon.[1]

Several of Lefty's vocal mannerisms (outside of his elongated "Riiiight") derive from two different 1940s old-time radio characters, both of whom were a bit shady and had labels rather than names. One was "The Tout" from The Jack Benny Program, introduced in 1945 and played by Sheldon Leonard. Greeting Jack Benny in a breathy, gangster-style undertone, the tout would say "Hey, bud... c'mere a minute," to which Jack would usually respond "Who, me?" He would then attempt to "tout" Jack into changing trains, elevators, tables, whatever, but always in horse racing parlance.

The other influence was an even earlier character known only as "The Salesman," played by Eddie Marr on Jack Carson's The Camel Comedy Caravan in 1943. (Marr, who specialized in huckster and barker roles, used elements of the character on other series, including Benny's.) The Salesman would show up and try to sell anything to Jack Carson (even a gun to commit suicide) and his catchphrase was "Tell ya what I'm gonna do," which he turned into a novelty song that same year. The Lefty/Ernie story "Ernie Buys a 12" in the 1975 Big Bird's Busy Book includes examples of these radio elements. 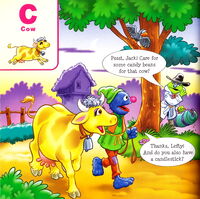 Storybook ABCs
(2008)
Add a photo to this gallery

Retrieved from "https://muppet.fandom.com/wiki/Lefty_the_Salesman?oldid=1194041"
Community content is available under CC-BY-SA unless otherwise noted.