Leland, Mississippi is a town in Washington County where Jim Henson attended elementary school until the late 1940s.

Leland bills itself as "Birthplace of the Frog and Home of the Blues."[1] A historic marker in the town reads:

“Birthplace of Kermit the Frog —
Jim Henson, creator of the Muppets grew up and played along Deer Creek during the years 1936-1948, exploring its flora and fauna from here to Stoneville. Sometimes, he was joined by his friend, Kermit Scott. These experiences and fond memories spawned in Henson's mind that timeless creation—"Kermit," the original Muppet.”

Henson was born in nearby Greenville, and the Henson family lived in Stoneville, an adjacent unincorporated community where Henson's father worked as a USDA agronomist (Henson attended elementary school in Leland, because Stoneville had no schools of its own). Furthermore, Henson created his first Kermit puppet while living in Hyattsville, Maryland, and the original Kermit was not a frog but rather a lizard-like character of indeterminate species.[2]

Birthplace of the Frog

"The Birthplace of the Frog: An Exhibit of Jim Henson's Delta Boyhood" is a special exhibit housed in the Washington County Tourist Center/Leland Chamber of Commerce building in Leland, Mississippi. The exhibit was given as "a gift to the people of Leland" by Jane Henson and the Jim Henson Legacy. The exhibit originally opened in August 1991 as "The Jim Henson Memorial and Muppet Museum."[3] The exhibit features a tableau honoring Kermit the Frog's birth on Deer Creek, photographs from the Henson family albums, early Henson Company Christmas cards, letters from Jim Henson, and a video center with many of Henson's early works.

A separate room is filled with Muppet memorabilia and merchandise donated from the personal collections of various individuals.

A highlight of the exhibit is a replica of Kermit, donated to the Museum for permanent display. He is posed sitting on a log playing his banjo in the Mississippi swamp. Located in a large glass display case, it is the centerpiece of this small Museum.

A more recent addition to the museum is a collection of the puppets from the special "The Song of the Cloud Forest", which originally aired on The Jim Henson Hour in 1989. These puppets are on loan from the Jim Henson Legacy. Among the puppets on display are Milton and Ruth.

The gift shop features many items featuring the Leland Mississippi logo with Kermit. A gigantic plush Kermit is also available for guests to pose for pictures with. 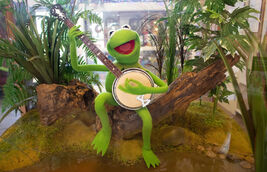 Kermit the Frog on display at the exhibit 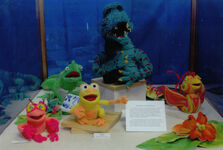 Song of the Cloud Forest Muppets on display at the exhibit 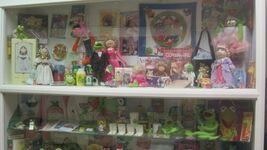 Muppet merchandise on display at the exhibit

In 2011, the town of Leland renamed the Broad Street Bridge over Deer Creek "The Rainbow Connection," after the song from The Muppet Movie. Large, green Kermit-shaped footprints (or "frogtracks" are painted along the road leading from the bridge to the "Birthplace of the Frog: An Exhibit of Jim Henson's Delta Boyhood" exhibit.

The public dedication of the bridge took place on Henson's 75th birthday—September 24, 2011—during the local FrogFest event. Fran Brill was a special guest at the dedication ceremony.

The community of Leland hosts the Leland Frogfest, an annual festival of the arts to celebrate the Henson Exhibit in the Mississippi Delta. The event features hands-on arts venues, professional storytellers, magicians, live music, Delta cuisine and live puppet performances. Additionally, starting in 2013, the annual Deer Creek Chili Cook-off and 5K-run partnered with the Leland Frogfest for a single festival. The event is held in downtown Leland at The Rainbow Connection Bridge.

On October 18, 2005, the United States Postal Service held a ceremony for the Jim Henson and the Muppets postage stamps that featured a "Birthplace of the Frog Station" pictorial cancel. Although the cancel bears the and name and ZIP code of Leland, the ceremony actually took place in the neighboring Stoneville.[4]

Cheryl Henson was in attendance and later signed copies of her book It's Not Easy Bein' Green: And Other Things To Consider at the Birthplace of the Frog exhibit in Leland. Henson also dedicated the then-new Song of the Cloud Forest display for the exhibit.

Wikipedia has an article related to:
Leland, Mississippi
Community content is available under CC-BY-SA unless otherwise noted.
Advertisement