Lena Headey (b. 1973) is a British actress, known for playing Cersei Lannister in HBO's Game of Thrones (alongside Peter Dinklage). She appeared on Sesame Street in a Word of the Day segment for Season 44 (2013) and provided the voice of Maudra Fara in The Dark Crystal: Age of Resistance. In 1998, she played Guinevere in the Creature Shop-effects TV movie Merlin. 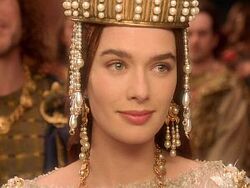 As Guinevere in Merlin
Add a photo to this gallery

Retrieved from "https://muppet.fandom.com/wiki/Lena_Headey?oldid=1245115"
Community content is available under CC-BY-SA unless otherwise noted.