The lioness Leonie Löwenherz (Leonie Lionheart in English) was featured on Sesamstrasse, the German version of Sesame Street. A school friend of Tiffy's, she tends to be frequently selfish and penetrating.

During the 1986 season, the character appeared for a very short time, before the show's original set and puppets were destroyed in a fire in 1988. Just like Uli Von Bödefeld, she was built by a German puppet workshop (in this case Winfried Debertin's workshop), and not the Muppet Workshop.

After her short-lived Sesamstrasse career, she received her own (ALF-like) show, Leonie Löwenherz, that ran from 1991 until 1993. The 44-episode show featured herself, her two lion brothers Lambert and Ludwig, and a small cast of human characters. The series was a co-production of Norddeutscher Rundfunk (NDR) and Hessischer Rundfunk (HR).

Two puppet visually different versions of Leonie existed: the first, slim-faced and slim-bodied puppet that appeared on Sesamstrasse, and the slightly, yet noticeably bigger version, used throughout her own show. 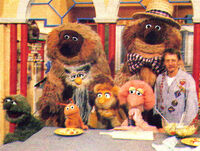 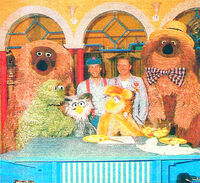 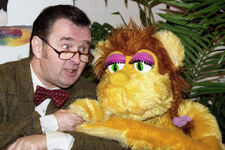 Leonie and co-star Ernst H. Hilbich, in a promotional photo for her spin-off series
Add a photo to this gallery
Retrieved from "https://muppet.fandom.com/wiki/Leonie_Löwenherz?oldid=1352065"
Community content is available under CC-BY-SA unless otherwise noted.