Muppet Wiki
Register
Don't have an account?
Sign In
Advertisement
in: Muppets Most Wanted Characters, Muppet Characters, The Muppets Characters

Leprechauns are mythological Irish creatures, usually of a smaller humanoid build. They most often speak with a hard Irish accent and are known for protecting their gold at the end of rainbows.

In Muppets Most Wanted, Leprechauns serve as security guards for the Irish National Bank, but find themselves distracted by a performance of The Muppet Show. Their performers include Mak Wilson,[1] Nigel Plaskitt,[2] and Bill Barretta, who performs the only Leprechaun who speaks, thankful their pot of gold was not stolen.

In a bit of foreshadowing, their pot of gold can be seen behind Dominic Badguy (holding a rubber chicken) when he and Constantine are first breaking into the Irish bank vault. Later, Jean Pierre Napoleon and Sam the Eagle find the rubber chicken in the pot of gold, citing it as evidence that Fozzie Bear is the culprit. 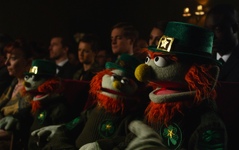 The leprechauns watch the Muppets' show in Muppets Most Wanted. 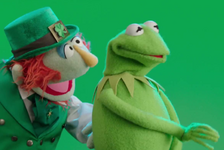 A leprechaun pinches Kermit in a 2014 Saint Patrick's Day video. 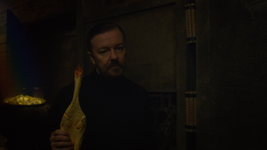 The leprechaun's gold behind Dominic in Muppets Most Wanted. 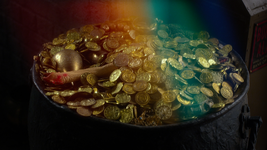 The leprechaun's gold in Muppets Most Wanted. 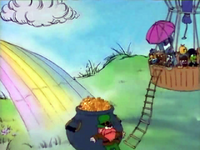 "Around the Nursery in 80 Days"