Leslie Uggams (b. 1943) is an actress and singer who won a Tony Award for Best Actress in a Musical for "Hallelujah, Baby!" in 1968. Her film and television credits include Roots, Backstairs at the White House, Empire, and Marvel's Deadpool films.

She guest starred on The Muppet Show episode 318. She also appeared on A Special Sesame Street Christmas and Julie Andrews: One Step Into Spring. 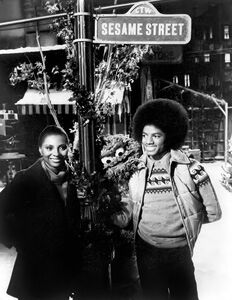 Uggams, Oscar the Grouch and Michael Jackson from A Special Sesame Street Christmas special
Add a photo to this gallery

Wikipedia has an article related to:
Leslie Uggams
Retrieved from "https://muppet.fandom.com/wiki/Leslie_Uggams?oldid=1229000"
Community content is available under CC-BY-SA unless otherwise noted.