Let's Be Friends is a Sesame Street Live show, produced by VEE Corporation in 1994. It was repeated in the United States on tours from 1995 to 1997, and again from 2000 to 2003. Elmo and Zoe start a friendship club and soon everyone wants to join.

This was the first show to include Zoe, and the return of Snuffleupagus to Sesame Street Live productions.[1] 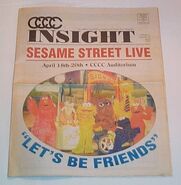 Retrieved from "https://muppet.fandom.com/wiki/Let%27s_Be_Friends?oldid=1277066"
Community content is available under CC-BY-SA unless otherwise noted.