Let's Go to the Park is a 1994 Sesame Street board game published by Golden. In the game, players move a character down Sesame Street, from the 123 Sesame Street brownstone, past the Furry Arms Hotel and down to the Park. The game highlights the new "Around the Corner" locations introduced in 1993's Season 25.

The character pieces feature some of the newer early-90s characters, including Rosita, Chicago the Lion and Merry Monster, alongside veteran characters like Big Bird, Oscar the Grouch, Cookie Monster, Grover, Ernie, Elmo and Barkley.

The player spins a spinner and moves up to three spaces down the board. The player must stop at squares marked with a traffic light. If the player lands on a "friendship square" marked with a handshake icon, they can add another character to their party of friends. The winner is the first player to make it to the Park. 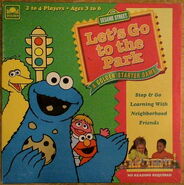 Retrieved from "https://muppet.fandom.com/wiki/Let%27s_Go_to_the_Park?oldid=1095297"
Community content is available under CC-BY-SA unless otherwise noted.