The Library is a common point of interest on Sesame Street, staffed by a number of Librarians. Its location has shifted over the years from an address on Sesame Street to other areas in the neighborhood.

It first opened in Episode 0290 (1971) and was originally located next to Hooper's Store, in the spot that has since housed the Fix-It Shop and Mail It Shop. Known as the Lending Library, there were books both indoors and outdoors, and there was also a large children's section. All the residents of Sesame Street would come to borrow books. Maria worked there as a part-time job when she was still in school.

Later, when the Fix-It Shop came along, the library shifted to other locations; in particular, the one in which Linda worked beginning in Episode 1868. Some of them, as seen in various storybooks, were a enough of a distance from Sesame Street that a certain amount of traveling was required to reach them. A map 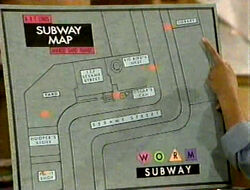 shown in Episode 3106 establishes the library as across the street from Big Bird's nest. Linda's assistants have included Micki, Lisa, and Tico. According to Episode 2546, the library is open from 9 AM to 5 PM Monday through Saturday. A few episodes explicitly have characters referring to it as "the Sesame Street library," such as Elmo and Gina in Episode 2640, Henry Wadsworth Wrongfellow in Episode 2718, Marv and Jolene when delivering books in Episode 2727, and Gordon when welcoming the viewer in Episode 3589. Multiple scripts (including Episode 2924 and for the insert "I'm a Bookworm, Baby") call it "Sesame Street Library" when giving scenic specifications. 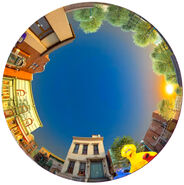 the library's location in 2008, as seen in One World, One Sky: Big Bird's Adventure