Lilo was one of the main characters on Sesamstrasse, the German version of Sesame Street, during the first half-decade of the show (1978-1983). She was played by Liselotte Pulver (or "Lilo" Pulver for short), and even though the character's last name was never revealed, the show made it appear as if the actress was basically playing herself.

Because the street scenes were repeated in new episodes for several years after, and intermixed with newly produced material, it appeared as though she "lived" on the street well into the early 1990s. 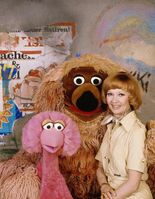 Lilo with Samson and Tiffy

Lilo relaxing with her bear in his hammock... 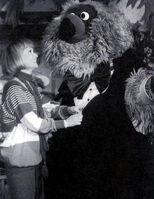 ...and getting him ready for a special occasion

With Tiffy, Manfred and Samson 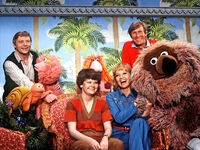 Lilo (front right) with Samson and her Sesamstrasse family

Caroll Spinney drawing of Lilo and her fellow cast members (1980)
Add a photo to this gallery
Retrieved from "https://muppet.fandom.com/wiki/Lilo?oldid=1235689"
Community content is available under CC-BY-SA unless otherwise noted.