Ronstadt appeared as the guest star in episode 523 The Muppet Show, where she and Kermit the Frog share a mutual attraction for each other. The two reuinited years later for a duet of "All I Have to Do Is Dream" on the Kermit Unpigged album.

She also appeared in a pair of Sesame Street in season 20, including singing "Y Andalé" with a mariachi band (First: Episode 2487) and "La Charreada" with Elmo. (First: Episode 2540) While her Muppet Show appearance was related to her career as a pop singer, her two appearances on Sesame Street tied in with her recording several popular albums of traditional Mexican music. Ronstadt also recorded the song "I Want a Horse" for In Harmony: A Sesame Street Record, released in 1980.

Although initially considered a country-rock singer, she branched out into other musical fields in the 1980s, including a Tony-nominated performance in a 1980 Broadway revival of Gilbert and Sullivan's The Pirates of Penzance, produced by Joseph Papp, which was adapted as a movie in 1983. She later starred in a short-lived Off-Broadway revival of the opera La Bohème in 1984. 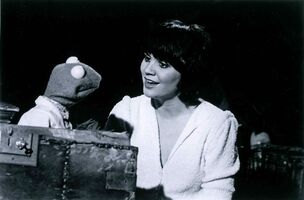 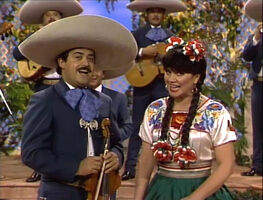 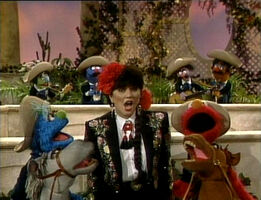 Linda Rodstadt on Sesame Street with Elmo and Parker Monster. 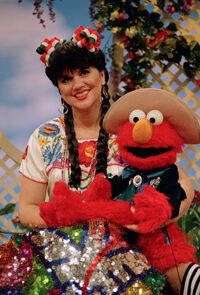 Wikipedia has an article related to:
Linda Ronstadt
Retrieved from "https://muppet.fandom.com/wiki/Linda_Ronstadt?oldid=1259614"
Community content is available under CC-BY-SA unless otherwise noted.