Liselotte "Lilo" Pulver (b. October 11, 1929) is a Swiss actress who played Lilo on Sesamstrasse from 1978 until 1983, making Lilo one of the first two human characters on the show.

Pulver began her career, after leaving trade school, as a model, and then studied acting. She made her film debut in 1949, in the American comedy Swiss Tour (starring Cornel Wilde). The buxom Pulver want on to become a frequent presence in German and French films, including The Confessions of Felix Krull and The Adventures of Arsene Lupin.

She remained prolific in European films, before and after Sesamstrasse, prior to her retirement in 1996. She has published several volumes of autobiography about her sometimes tragic private life. 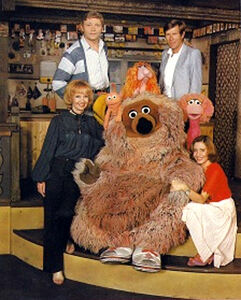 Pulver (left) with fellow actors Uwe Friedrichsen,
Horst Janson and Ute Willing in 1983.
Add a photo to this gallery

Retrieved from "https://muppet.fandom.com/wiki/Liselotte_Pulver?oldid=1073195"
Community content is available under CC-BY-SA unless otherwise noted.