Little Bird first appeared on Sesame Street in Season 1 and was often used as a foil to Big Bird, due to their contrasting sizes. Little Bird was recycled from the Muppet version of the Kenner Gooney Bird created by Jim Henson for Easy Bake Oven commercials in 1968.

Although Little Bird is primarily performed by a female puppeteer, the character is most often male. The song "Mr. Big Bird, Mr. Little Bird" appears on the Grin & Giggle with Big Bird LP, where the character is referred to using masculine pronouns. The 1973 Character Style Guide from CTW also describes him as a "he." In contrast, there are at least two instances of the character being identified using female pronouns; Sleepytime Bird (1977) and the street story for Episode 2748 (1990). In episode 59 of The MuppetCast, Fran Brill confirmed in an e-mail that she always thought of Little Bird as a male.

Henson, who originated the Bird in the Kenner commercials, performed Little Bird in at least two sketches from the first season: a sketch from Episode 0028, in which he meets Big Bird, and the game show "Pick Your Pet." Although Little Bird was used sporadically on the show, he proved effective with test audiences:

“Although he did not appear often, children were really attentive to Little Bird. They participated fully during his "Imagination Game." Perhaps he could play a greater role on the street.[1]”

Little Bird was used rarely on the show itself beyond the 1970s (although he continued as a minor character in books). However, he made several cameo appearances on the show during the 1980s and 1990s. He was a recurring patron of Birdland (such as in "The Birdland Jump"), appeared in a brief fly-by during the song "Do-Op Hop," and sang a line in "We Are All Earthlings." Little Bird also appears in the "Rainbow Connection" finale in The Muppet Movie, features in a 1999 promotion group shot (pictured), and appears as an animatronic figure in the ride Spaghetti Space Chase at Universal Studios Singapore.

Episode 2748 from 1990 (in which she appears as a girl) featured a street story focused on Little Bird moving to Sesame Street. She tries to be nest mates with Big Bird but finds that she can't sleep with the noise of his snoring. She asks Oscar if she can move into his trash can, but he says he doesn't share his can with anybody nice, unless they're messy. He starts to warm up to the idea when he realizes they're arguing about it, but by then Little Bird isn't interested anymore. After she decides she wouldn't want to live on Snuffy's back either, everyone gets the idea to build her a house out of an old milk carton. A regular sized one is too small, so they build one out of a Snuffleupagus sized carton, except another bird moves in before she can. Finally, when everyone is drinking glasses of milk to empty another carton, Little Bird decides to just move back to the park instead.

Long absent from the series, Little Bird returned for new appearances in Sesame Street's 50th Anniversary Celebration and in the show's 50th season, performed in the latter by Stephanie D'Abruzzo. In the season premiere, it is revealed that Little Bird is Big Bird's cousin and currently lives in California. Little Bird also has a teddy bear named Walter, which, like Big Bird's Radar, is a reference to Walter O'Reilly from M*A*S*H.

Marionette versions of Little Bird have been used often for flying scenes such as in Episode 0261, Episode 0396, the "Song of One," "I Whistle a Happy Tune," and "Do-Op Hop"; the character has also appeared in animated form.

The Little Bird puppet has been used as the basis of other one-off characters by adding or removing feathers and facial features, including a mommy bird, a duck in the story of "The Queen's Questions," and a Hickory Dickory Duck. A rare exception is in Episode 0727, where an unaltered Little Bird plays a baby bird that Big Bird helps hatch and raise. 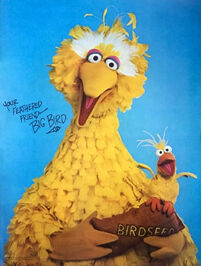 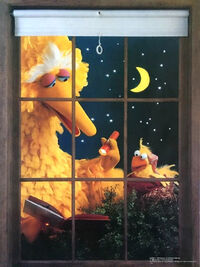 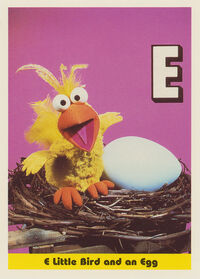 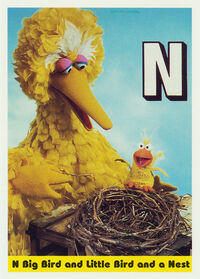 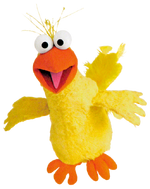