Template:Am Little Jerry is the lead singer of Little Jerry and the Monotones and has performed several songs on Sesame Street, including "Four," "Telephone Rock," and "Mad". He also appeared without the Monotones in an early 1970 sketch with a group of other hippies (and the early Grover) demonstrating "Foward" and "Backward" with a Hot Pink Anything Muppet leading the lecture. (First: Episode 0069)

In a 2000 episode, Little Jerry got a revised look. He no longer had his hippie clothing, and now wore a white shirt, black vest, a new kind of medallion, and a pair of sun glasses. In that same episode, it is revealed that he knows how to play computer as a musical instrument. 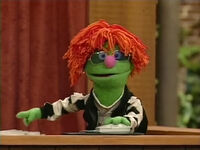 Revised wardrobe in 2000.
JerryandJeffy.jpg
A photo of Little Jerry, Big Jeffy, and another Fat Blue AM in "Rock & Roll!". 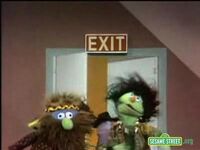 Little Jerry with black hair in the "exit" sketch.‎
Add a photo to this gallery

Retrieved from "https://muppet.fandom.com/wiki/Little_Jerry?oldid=541700"
Community content is available under CC-BY-SA unless otherwise noted.