Little Mermaid's Island was a project proposed by Jim Henson in 1990, during talks with The Walt Disney Company, as a spin-off of Disney's animated film The Little Mermaid. Two episodes were shot, but never aired: "Sebastian's Birthday" and "Tell the Truth." It was intended as a daily series to air on Disney Channel, with puppets against blue screen and human characters interacting. Filming took place in a studio (once owned by Mary Pickford) in the Silverlake district of Los Angeles.[1]

According to Karen Falk, "the Henson Workshop created the puppets and Ed Christie went out to the shoot to wrangle them, but that was the extent of our involvement. Jim did not work on it himself (did not direct, produce, perform) and was pretty disappointed by the pilot. It was one of the few projects done while our company was in transition to Disney right before Jim died."[2]

In the show, Ariel was portrayed by a human performer, Marietta Deprima, playing opposite puppet versions of Sebastian the crab, Scuttle the seagull, Flotsam and Jetsam the eels, and Flounder the fish, as well as a new character, Flounder's twin sister, Sandy.[3] The other live cast member was character actor Clive Revill as a variation of Grimsby from the original film, here re-conceived as a jovial sea captain who lived on an island nearby to Ariel.[3] The puppet used for Ambrosius in Labyrinth was recycled as Max the sheepdog. There was also a full body puppet called Scales the Dragon, a musical dragon who lived in a cave and created songs with his rock piano and pots and pans.

Each episode was planned to have four musical numbers, with ten songwriters assigned to the project. The project went into pre-production before the release of the film, with many of the original vocal cast set to reprise their roles (including Samuel E. Wright and Buddy Hackett).[4]

For scenes of Ariel swimming, a rod puppet was used to simulate her movements underwater.[5]

Jim Henson died within two months after the pilot was shot. The two episodes filmed lack the end credits and the final opening titles. A Disney animated series of The Little Mermaid, unrelated to Henson's production, ran on CBS from 1992 to 1994.

Ariel and her friends are planning a surprise birthday party for Sebastian. While searching for his friends, Sebastian tells Scuttle that it is his birthday, which the seagull misinterprets as "bird day." Sebastian is joined by a chorus of oysters in a song about his birthday, followed by another number by Ariel and Flounder which convinces the crab they are too busy to play with him. On his way to visit Scales, Flotsam and Jetsam try to convince the crustacean that his friends have forgotten his special day, and no longer care about him.

Once Sebastian reaches Scales, the dragon goes into another musical number to try and mask the noise of Sebastian's birthday balloons popping. Heading home with a headache, Sebastian meets the eels once again, who reinforce their message that friends are unnecessary.

Grimsby and Max the sheepdog dock at the pier with the three-layer birthday cake, where they meet up with the confused Scuttle. The seagull and Grimsby sing another song as they head towards the party.

Meanwhile, Ariel has broken Sebastian's present while attempting to wrap it. She sings another number about their friendship, and ponders another gift for the crab.

Convincing Sebastian to come to Scales' cave, a reprise of Sebastian's birthday song is sung, and Ariel gives the crab his present, a framed poem written by the mermaid. As the show ends, Sebastian blows the candles of his cake out with a mighty gust, covering Scuttle with frosting.[3]

Flounder and Sandy receive a lesson in honesty when they accidentally knock over Ariel's collection of pearls.

One of the songs from this episode was later re-purposed for the Sesame Street home video, Telling the Truth. 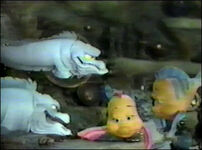 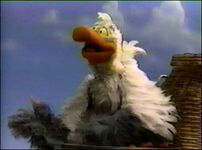 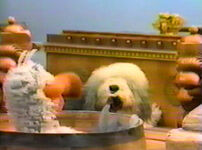 Scuttle and Max the Sheepdog 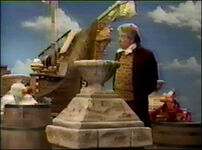 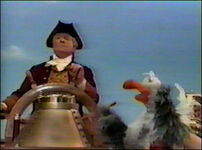 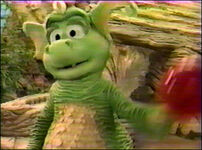