Jim Henson's Little Muppet Monsters was a 1985 Saturday morning TV show which aired only three episodes on CBS, with as many as 15 episodes going unaired.[1] The first season of Muppet Babies did very well in the ratings, so CBS decided to expand the series from half an hour to an hour-long block, pairing Muppet Babies with Little Muppet Monsters to make an hour-long package (with its own intro) called Muppets, Babies and Monsters.

The show was anchored by three young Muppet monsters, Tug, Boo, and Molly, living with Muppet rats, penguins and other characters. Muppet Show characters such as Scooter, Kermit, Janice, and Floyd appeared in cameos. The Electric Mayhem were featured in both intros watching the show on television, as they excitedly bounced about on a living room sofa. Miss Piggy also appears in the intro.

Recurring animated segments included "Pigs in Space," "Kermit the Frog, Private Eye" (as introduced by the puppet Kermit, with Fozzie and Miss Piggy), "Muppet Sports Shorts" starring Animal, and Muppet Labs with Bunsen and Beaker. Gonzo would also have appeared in animated segments.

The show was split at about 50% animation and 50% puppetry, with appearances by Kermit, Fozzie, Gonzo and others being shot in London, and the rest in New York. The puppet segments from three unaired episodes were leaked to the internet in 2015.

“The concept of this second half-hour was neither simple nor particularly well-developed. A trio of new (live-action) Muppet Monster Kids, working from the basement of the adult Muppets' home, create their own television station which broadcasts only to the TV sets in the house upstairs... Although eighteen episodes were produced, only three of them ever aired; Henson Associates and CBS agreed that the concept had never been properly thought out and just wasn't up to Henson's high standards. To Jim's credit, it was his idea to pull the show from the Saturday morning lineup. ...I've always felt that the juxtapositioning of live-action and animated Muppets invited an unfavorable comparison, to which the cartoon version inevitably suffered; the puppetry was just too good. The combination of Muppet babies, adults and kid monsters was very disorienting. Also, due to a lack of development time, the concept -- and therefore, the writing and designs -- never quite jelled.”

A major factor that contributed to the show's cancellation was the fact that Marvel Productions had trouble delivering the animation on time. Marvel "blew it," as series writer and puppeteer Kathryn Mullen remembered in 2013, and there were no completed shows to fill the extra half hour: "So they [CBS] put another Muppet Babies on, two episodes back-to-back, the viewership shot up, and they said, 'Forget Little Muppet Monsters.'" As for the unaired episodes, "We never finished them. The puppet wrap-arounds were done, but they never put the animation in."[2]

Even after Little Muppet Monsters was cancelled, an instrumental version of its opening theme was used in the Muppet Babies end credits from 1985 onward.

Fozzie Bear and a pie.

Tug and a penguin. 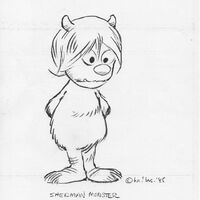 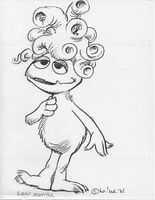 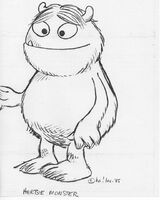 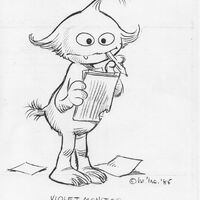 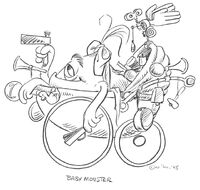 “As to Little Muppet Monsters, I do not have any licensed product from that show. There was an ambitious licensing program discussed (toys, games, puzzles, apparel, housewares, and stationery) but very little produced.”

According to the Henson newsletter, Toy Fair 1986 would have seen the launch of plush by Hasbro, board games and puzzles by Milton Bradley, puzzles by Playskool, costumes by Ben Cooper, stickers by Diamond Toy, balloons by Balloon Concepts, boys and girls sportwear by Allison Mfg., greeting cards by Hallmark, belts by Lee Belts, pajamas by PCA Apparel, and party supplies and gift wrap by Beach Producers. Unfortunately, the show was not on the air long enough for this to occur. A Playskool puzzle drawn by Guy Gilchrist was produced in very limited quantities.[3] 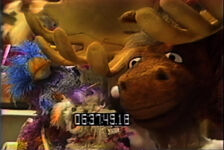 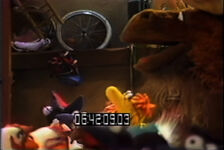 Scooter overwhelmed by chickens, penguins, and a moose (Foo-Foo Phooey) 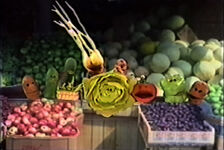 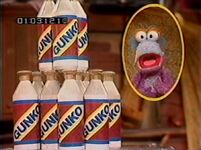 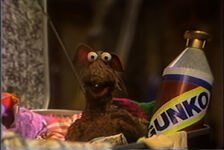 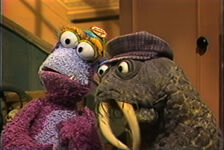 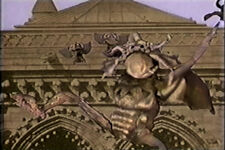 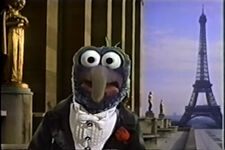 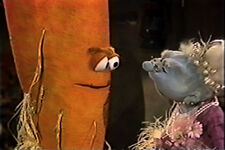 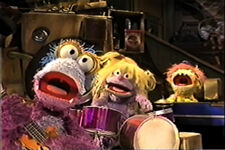 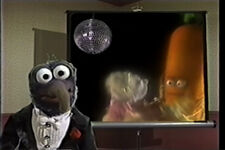