A live-hand Muppet is one of the the three common types of Muppets, the others being the Full-Bodied Muppet and the Hand-Rod Muppet. The hands for these puppets are actually gloves, which the puppeteer puts his or her less dominant hand into. This way, the puppet is able to manipulate objects, like picking things up or playing a piano. These puppets tend to be large to stay in proportion with the large human-sized hands.

Since the lead puppeteer has one hand in the head and the other hand in one of the puppet's arms, another puppeteer is usually used to operate the other hand (or sometimes both, in more complicated scenes). The term for this is right-handing. This is usually done by the newest performers, and tends to be a difficult task. Because most Muppets only have four fingers, the puppeteer places the pinky and ring finger into the puppet's pinky finger. Examples of this type of puppet are Ernie, Cookie Monster, Sam the Eagle, Fozzie Bear, Sprocket, Large Marvin Fraggle, and many others. Several Sesame Street characters are made from the Large Lavender Live Hand Anything Muppet pattern, such as Count von Count, The Amazing Mumford, Forgetful Jones, and Harvey Kneeslapper.

Onky, a character created for a series of On-Cor Frozen Foods commercials, is cited as one of Jim Henson's earliest live-hand Muppets:

“The puppet style was a departure from the hand and rod puppets Jim had been using – Onky had “live-hands” meaning the puppeteer put his hand in the puppet’s glove-like hand, enabling the character to easily pick up things (like the product being advertised) and give a more realistic performance. While Onky’s arms were short and almost flipper-like, making for an awkward kind of movement, later in the year, Jim and his new collaborator Don Sahlin created a live-hand puppet that was extremely expressive: Rowlf the Dog.[1]”

Since the principal puppeteer often has their right arm in the puppet's head, they will use their left hand to manipulate the puppet's left arm. As such, a second puppeteer is needed to perform the puppet's right hand. Many Muppet performers get their start "right-handing" characters.

In some cases, where both hands need to work in more complex coordination the primary performer will puppeteer the head while the assisting performer will perform both hands (cases of this include The Swedish Chef or characters such as Rowlf or Dr. Teeth playing the piano).

Puppeteers Dave Goelz, Steve Whitmire, and Karen Prell talk in detail about the art of "right-handing" in an interview on "collaboration" featured on the Fraggle Rock Season One DVD set. 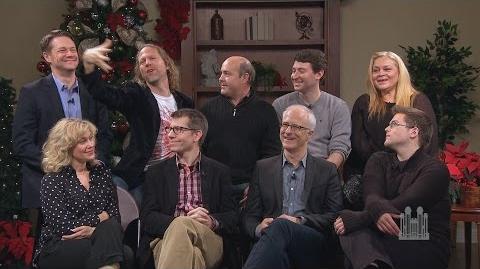